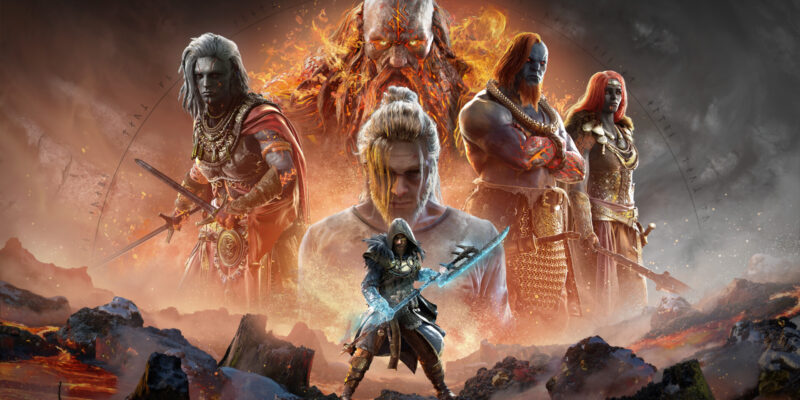 When I reviewed the more recent Assassin’s Creed games, Odyssey and Valhalla, I genuinely appreciated how Ubisoft embraced the fantasy and mythological aspects of the series. Fast-forward to the present, and we’ve got Assassin’s Creed Valhalla: Dawn of Ragnarok, which is touted as the most ambitious expansion in the history of the franchise.

You might think that an offering that delves further into Norse Mythology would be something I’d enjoy. Sadly, the overall presentation left a lot to be desired, even though there were some flashes of brilliance here and there.

Assassin’s Creed Valhalla: Dawn of Ragnarok puts you in the shoes of Odin (also known as Havi). Those who’ve played the base campaign would recall that Eivor is a reincarnation of the Norse god. As such, this tale is about the Allfather’s attempts to rescue his son Baldr from the clutches of Surtr. In fact, you end up battling this foe during a prologue, though neither Odin nor Surtr is fated to die so soon.

From there, the game opens up as you journey forth into Svartalfheim. The realm of the dwarves is another open-world location, with numerous points of interest and collectibles. You’ll be treated to a vivid landscape, with lush fields, towering mountains, gargantuan statues, and deadly pools of lava. In the distance, you’ll see the burnt roots of Yggdrasil, as well as floating islands that dot the horizon. At any point in time, you can choose to leave to continue your adventures in England or the other regions.

Be forewarned, though, that the expansion requires 340 power. But, there’s a boost that levels you up temporarily while you’re in Svartalfheim. In my case, I had already completed the base campaign and the two previous DLCs, which meant I was way too overpowered for every challenge thrown my way. 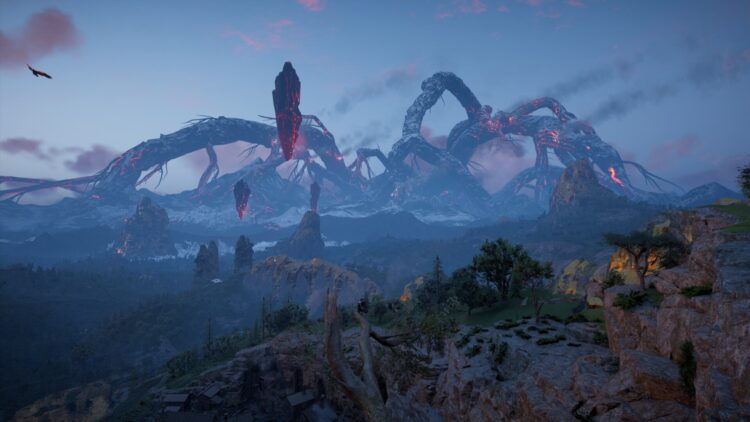 A prelude to the end of the world

From a visual standpoint, I have no complaints whatsoever, as Svartalfheim captures the aesthetic and themes of a fantasy setting. However, it starts to falter the moment you advance onward. You see, Dawn of Ragnarok implies that this is the prelude to the end of the world. Although you do see ruins and wreckage due to the invasion of the forces of Muspelheim and Jotunheim, the story and progression fall flat within hours.

After helping a couple of NPCs, Odin has to search for Dwarven Shelters. Upon meeting the important people there, you’ll begin the main quest arcs in Svartalfheim’s regions. The usual romp follows where you hold “V” to reveal objects that you can examine, escort/rescue NPCs, and kill a few baddies along the way.

Considering that this was supposed to be the most ambitious offering for the franchise, it certainly lacks originality. To be fair, having a rather formulaic presentation is par for the course in Assassin’s Creed, but seeing the same things play out in Valhalla‘s base game, Wrath of the Druids, Siege of Paris, and, now, Dawn of Ragnarok, was a bit much. 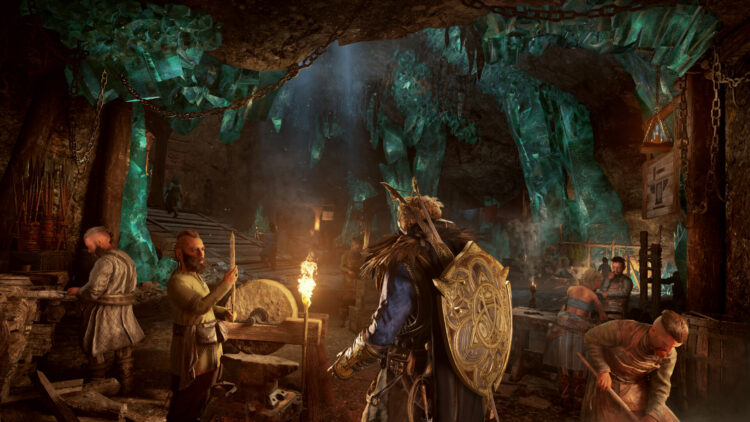 Assassin’s Creed Valhalla: Dawn of Ragnarok uses a lot of mechanics from the base game and DLCs. For instance, you’ll solve several light beam puzzles if you’re planning on grabbing weapons and abilities (more on these later). Likewise, you’ll encounter the annoying rat swarms from Siege of Paris. There are river raids again, but you’ve still got the same crew (only renamed as Einherjar).

Enemies, meanwhile, are mostly reskins too. They are humanoid in shape, save for having blue skin (Jotnar) or red skin with veins of lava (Muspels). Thankfully, they have attacks that would differentiate them from their counterparts (i.e., breathing fire, icicles erupting from the ground, transforming into bears/wolves, or magma spawning pools). 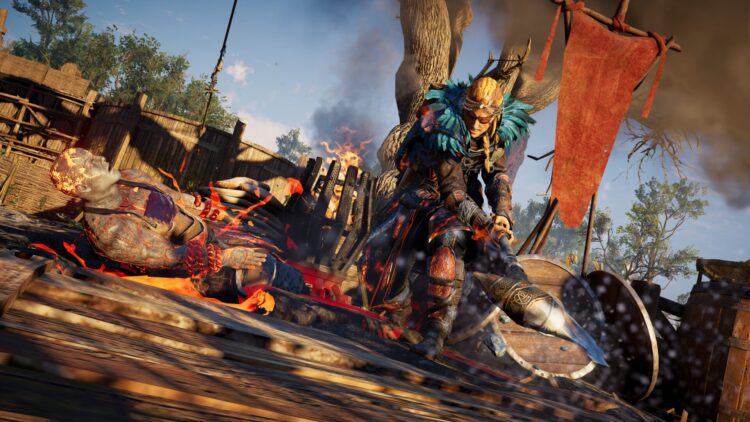 Just as well, you can pick up more equipment for Odin. These include the Hreidmar’s Curse set (which has a curse that needs to be cleansed), Fire Giant set, Dwarven Blacksmith set, and Jotun Mantle set. The last one even leads you to a portal where you can fight a secret boss for the Jotnar Cleaver weapon. Speaking of weapons, the new atgeir type is nice to have. One unique variant called the Fiery Warsong can be obtained by beating Sinmara’s Chosen (basically just a bunch of Zealots).

As for abilities, there are four new kinds: Rage Axe, Explosive Retreat, Knockback Arrow, and Split Shot. Among these, I found Rage Axe to be the most useful. It lets you do a flurry of chops, followed by an uppercut and a push, easily taking out a chunk of a target’s HP. Lastly, there’s Kara’s Domain, an arena where you can fight opponents that you’ve met during progression to earn rewards. These bouts include elites, named NPCs, and even Surtr. 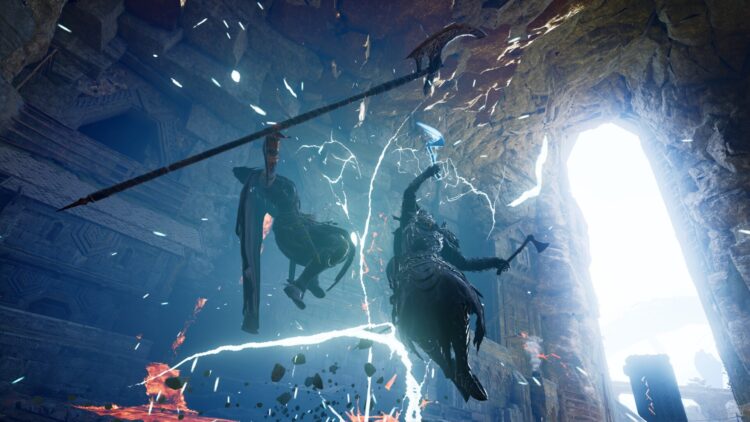 By far the biggest addition to Assassin’s Creed Valhalla: Dawn of Ragnarok is the Hugr-Rip. This ornate bracelet is acquired early in your playthrough and it allows you to gain powers from specific types of mobs that you’ve killed, while also changing your looks. For instance, the Power of Muspelheim, since it’s from the fiery enemies of the burning depths, lets you walk on lava without taking damage. Meanwhile, the Power of Jotunheim causes you to teleport when you fire your arrows at markers. An upgrade even allows you to do teleport-assassinate actions.

Perhaps the best Hugr-Rip ability is none other than the Power of the Raven. By transforming into a Raven, you can reach new heights, completely negating the hassles when climbing to tag fast travel points.

The Hugr-Rip powers are, essentially, a way to feel like you’re a god of sorts (since you’re playing as one). Once the duration is over and it needs to be recharged, you’re back to your puny, regular self. 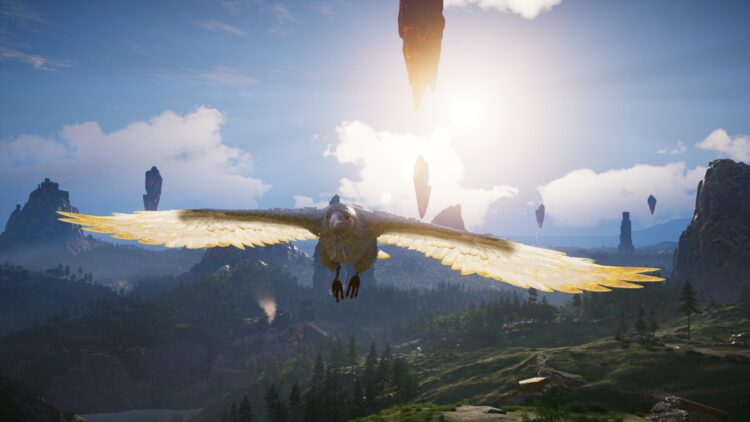 Putting the “No” in Norse Mythology

To be clear, Assassin’s Creed Valhalla: Dawn of Ragnarok does have a lot of content if you’re willing to roam around and explore. The weapons and skills I mentioned earlier are obtained as you’re free-roaming, though a few locations are also visited as part of main quest arcs. Considering that we received our code very late, I opted to discover these areas and items to complete our guides hub (the endeavor took me around 15 hours). As for the campaign itself, it barely clocked in at 10 hours.

If the rather short campaign was already off-putting, then another part that soured the experience was that I found it hard to relate to Odin/Havi. True, I definitely appreciate how Ubisoft brought mythology to life in the recent Assassin’s Creed games. However, that often went hand in  hand with the main character’s journey and personality that you’ve grown accustomed to for dozens to hundreds of hours. 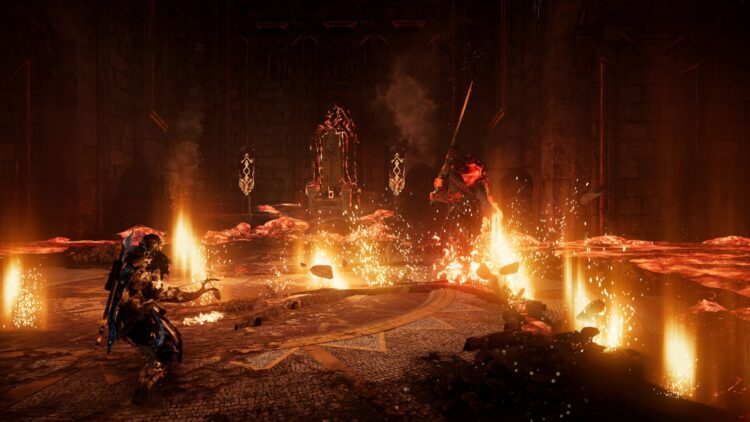 The mythology is part of the story and the character’s growth, not something taken separately on its own. Indeed, look no further than Odyssey‘s The Fate of Atlantis, which practically wowed you because of the reveals and implications. That led to a free update for Valhalla where Eivor and Kassandra finally met.

Because you’re playing as a different protagonist in Dawn of Ragnarok, this loose connection with the main character wasn’t enough to hook me. Other issues, such as repetitiveness and unoriginal mechanics, also led to a tiresome slog. I actually felt that my romp in the base game’s Asgard arc, and a portion of the finale, provided a more epic feel than this expansion. Lastly, since Assassin’s Creed Valhalla: Dawn of Ragnarok was released separately, it means that players who already have the season pass would need to shell out extra for something that isn’t guaranteed to enrich Eivor’s story. 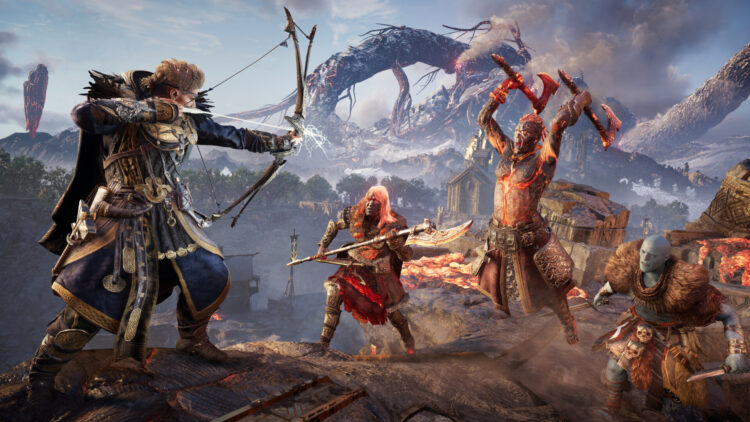 Touted as the most ambitious expansion in the franchise, Dawn of Ragnarok brings you to Svartalfheim as you take on the role of Odin/Havi.
6

While Assassin's Creed Valhalla: Dawn of Ragnarok has some brilliant ideas, it's far from the epic expansion that you'd want it to be. It's hampered by reused mechanics and a story that's woefully disconnected from your main character's arc.

The next expansion to Hearthstone, Voyage to the Sunken City, is coming in April

By Cameron Woolsey3 days ago
News