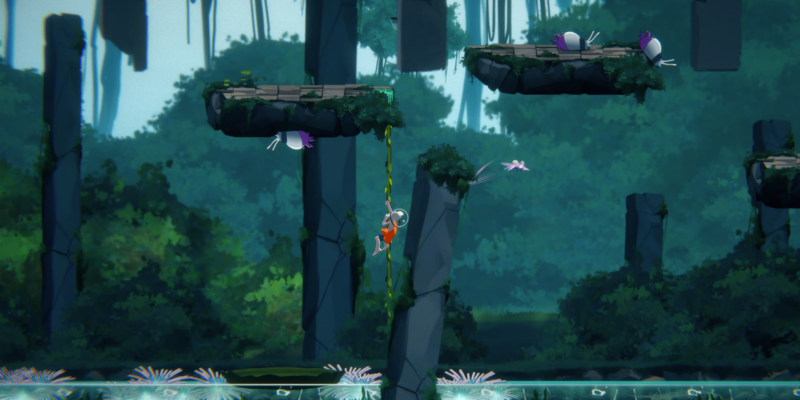 September of last year saw the release of Golf Club Wasteland, a unique 2D golf game set on a post-apocalyptic Earth. Most fans and critics responded positively to the experience overall, which largely had to do with its solemn atmosphere, effective environmental storytelling, and diegetic soundtrack. Those who enjoyed Golf Club Wasteland have something else to look forward to. Developer Demagog Studios aims to continue exploring the story of the game, albeit through a different genre. This pseudo-sequel, dubbed The Cub, features the same post-apocalyptic Earth setting, but it functions as a sidescrolling platformer rather than a golf game.

More specifically, The Cub takes cues from the old-school licensed Disney platformers of the Sega Genesis days, namely The Jungle Book, The Lion King, and Aladdin. It features a similar style of light-parkour platforming, but it further fleshes out the gameplay “with modern twists and ideas.” Throughout the adventure, players will hop and climb their way through abandoned labs, sparse chemical mines, and other dilapidated locations that tell the story of a world neglected by humans. Additionally, players will have to contend with tricky environmental puzzles as well as the barbaric humans from Mars that will hunt them down at every turn.

The Cub sees players controlling a mutant child that has adapted to the horrific conditions that led to Earth’s demise. At one point, some of the ultra-rich humans from Mars spot this child and begin pursuing him, forcing him to lead a life on the run. Just like Golf Club Wasteland, the child can listen to music and revealing commentary through the Radio Nostalgia from Mars station as he attempts to survive.

Overall, The Cub seems like a promising game much like its predecessor, and the change in genre should do more than enough to give the title its own identity. As of right now, Demagog Studios has not announced a release date, so players’ journey through the post-apocalypse could take a while to come to fruition.

Daniel Pinheiro
Daniel is a games journalist who is deeply passionate about the medium and the impact it can have on our lives. He is open to all kinds of genres, but has a particular affinity for platformers and beat 'em ups. He also helped back the Kickstarter for The Wonderful 101: Remastered.