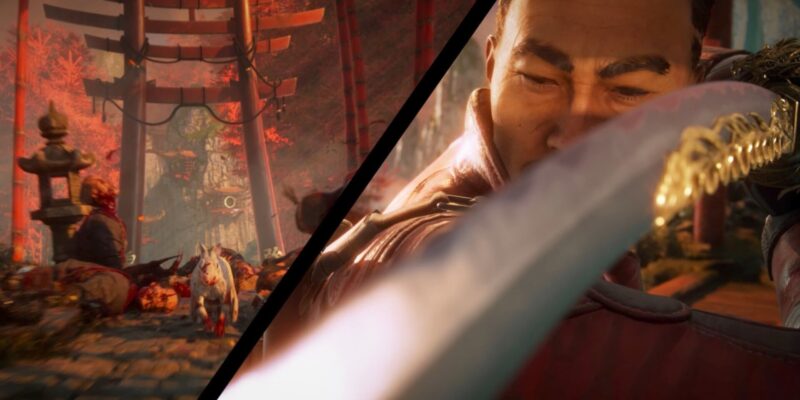 Flying Wild Hog has had to do a fair amount of pivoting with its Shadow Warrior games. The original was part of the classic “Build Trilogy” alongside the markedly superior Duke Nukem 3D and Blood, and very much had that classic mid ’90s FPS structure and feel. The reboot was similar to this and rather successful at it, but the sequel tried to hone in on some of the Borderlands audience by becoming a multiplayer looter shooter. The series is back to single-player gameplay, this time taking obvious cues from Doom Eternal. Shadow Warrior 3 is a good game with excellent visuals, strong monster design, and entertaining gameplay, but it’s held back by a bloated price tag and a truly tiny amount of content.

Shadow Warrior 3 picks up after the end of the second game. Lo Wang has spent a considerable amount of time trying and failing to defeat the dragon which showed up during that game’s conclusion. In the middle of an awkward expository cutscene where he monologues to Hoji’s mask in his tighty-whities, Orochi Zilla shows up and offers him a chance to work together to stop the dragon. The two set out before making contact with a sorceress, but things naturally don’t go exactly as planned.

The gameplay here is very frequently interrupted by cutscenes. The cutscenes themselves look great, but the writing and story left me bored. The voice acting is fine, but the dialogue is cringeworthy and nearly devoid of humor. This extends to gameplay sequences as, just like before, Lo Wang never stops talking. His ceaseless one-liners reek of someone trying to be “funny” without actually putting the effort in to make anyone laugh. Wang references old movies, makes dick jokes, and induces a hefty amount of wincing. He is endlessly irritating, and I honestly hope we don’t see him as a protagonist again unless he gets his voice box smashed. At least every cutscene can be easily and quickly skipped with the press of a button. 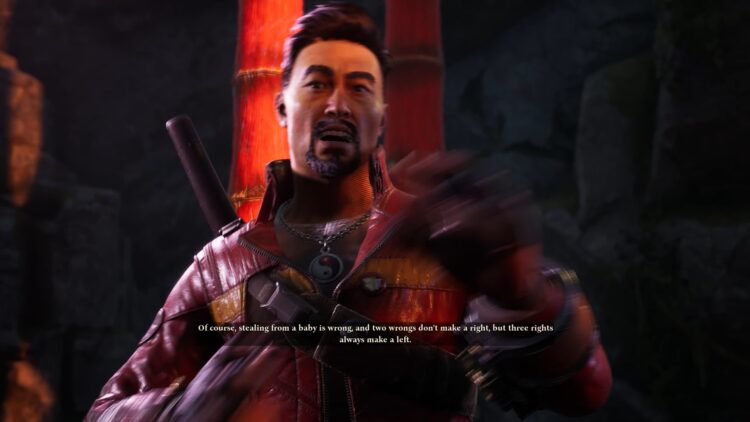 Shadow Warrior 3 completely does away with the looter shooter aspects of the last game. You need to pick up guns once, and then can upgrade both them — and Lo Wang himself — with upgrade orbs you find either in the levels or accrue via completing in-game challenges. The game is structured like an even more straightforward, arcadey Doom Eternal. Levels are comprised of multiple arenas connected through simple platforming sections. There’s not much room to explore, and the platforming areas, while quite pretty, are noticeably narrow and linear.

At least the movement controls are responsive and satisfying. Lo Wang can now double jump, air dash, use a grappling hook, and wall-run on specific surfaces. These four skills are constantly used in tandem with one another as you make your way through the platforming sections. You’ll also occasionally dodge obstacles while sliding down slopes. It’s all pretty easy, but these work well as set pieces, as the levels are visually distinct and the controls are dependable, even if these sections are almost always accompanied by more of Shadow Warrior 3‘s banal, eye-roll-inducing dialogue. Then again, this is why sound levels are adjustable.

Most levels swap between the aforementioned platforming sections and combat arenas against waves of enemies. Though, some levels do change this up with more specific challenges or more of a focus on platforming over action. One of the more interesting levels sees Lo Wang dodging obstacles to ride down a river on a platform alongside an egg. However, these sections can feel a bit monotonous, especially since you’ll mostly be doing the same things over and over again without much of a difficulty curve to speak of. But the game’s super short length means that, even then, it’ll all be over before your boredom could reach its peak. 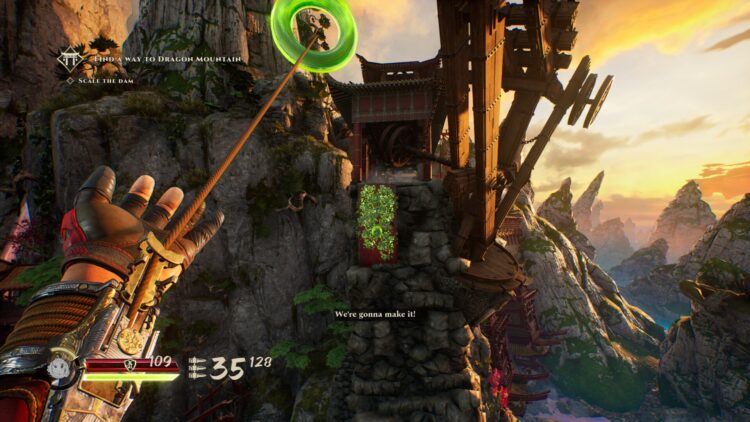 As for the combat, Shadow Warrior 3 strikes a good balance between carnage and control. Much like the platforming, combat is surprisingly painless. Lo Wang accrues a half-dozen guns which are fired with the left mouse button, whilst the right makes use of his katana. It’s a blast to rapidly switch between hacking enemies to pieces and blowing them apart. The guns themselves are mostly the usual suspects, including a pistol, shotgun, twin machine guns, and a rocket launcher. You’ll also get a gun whose shots need to be charged up, as well as a shuriken launcher that stuns foes.

Your goal in each arena is simply to dispatch all of the enemies. Guns don’t hold a lot of ammo, so, much like Doom Eternal, you’ll need to regularly switch them out. But enemies often require different approaches, which leads to a lot of prioritization. The loop is very satisfying. This is aided further by retaining Doom Eternal‘s focus on finishers and healing. Enemies drop health orbs upon death, but they don’t really heal that much. As you fight, you’ll fill up finisher charges, which you can use to instantly slaughter foes with a special animation.

Again, like Doom Eternal, there are fodder enemies that are around just for easy finishers. For instance, using a finisher on the game’s most basic enemy gives you 100 extra temporary health. Every finisher, regardless of which enemy you attack, heals Lo Wang completely. But every enemy offers a different bonus. Many of them give you temporary gore weapons that can easily turn the tide of battle. Due to all of this, fights feel like a well-oiled ballet of violence that are absolutely the best thing about Shadow Warrior 3. It isn’t up to Doom Eternal‘s level or anything, but it’s different enough to be enjoyable in its own right. 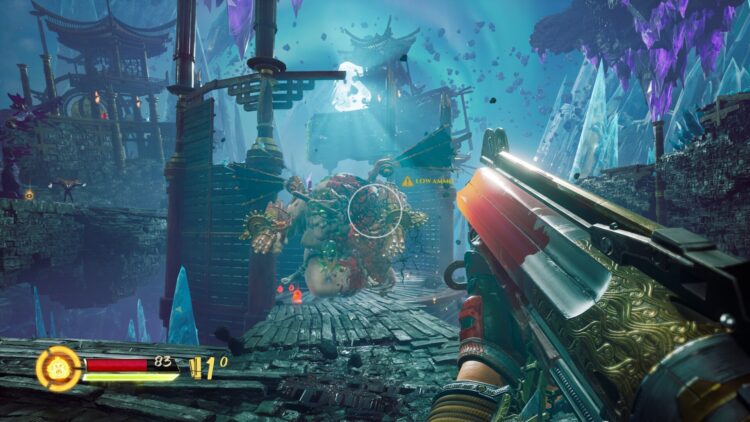 Aside from platforming sections and arenas, there are also boss battles in Shadow Warrior 3. But only two of them. One is a decent multi-phase fight that’s finished with a trigger sequence that repeatedly didn’t work correctly for me. The other, the final boss, is an anticlimactic, surprisingly easy battle that doesn’t take long at all. The game will probably take most players around four to five hours to get through. Then you beat the easy, disappointing final boss and the game’s over. Afterward, there is nothing else to do other than start a new game.

You read that correctly. Shadow Warrior 3 is a $50 USD game that’s around five hours long and has zero additional content. No horde mode, no multiplayer. Hell, there isn’t even a way to start a new game and keep all of your upgrades. When I beat the game, I was shocked. I still wanted more and I simply don’t understand how anyone could even think of charging $50 for this. Half that might be okay, but double the price is really not acceptable.

I do like the game whenever the characters aren’t talking, as it’s often very fun in addition to being quite lovely. But there’s very little content here for the price. Series fans should certainly pick it up, but I’d suggest waiting until it’s at least half off, because there just isn’t nearly enough to it. It almost feels like a budget spin-off in regards to what you get for your money. This is a shame, because the gameplay does do it for me — there just needed to be a lot more. And I really can’t understand why the price needs to be as high as it is for what customers are going to be getting. 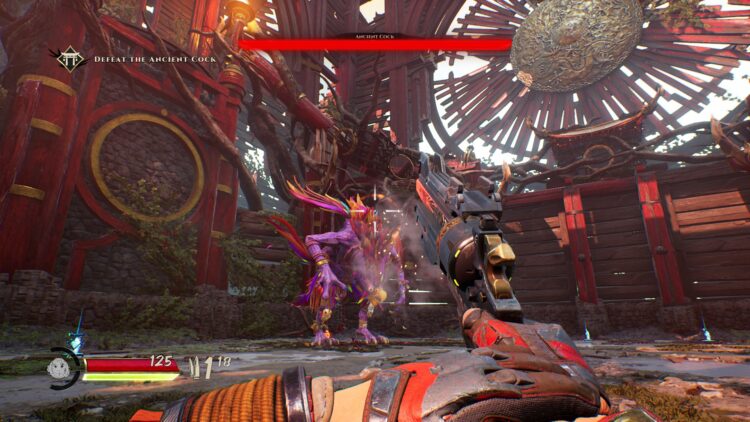 As if there weren’t already too many dick jokes in this game, this boss is named Ancient Cock. Did they hire out the Two and a Half Men writer’s room for this shit?

Pretty, action-packed, and fun while it lasts, Shadow Warrior 3 is well made as long as there isn't any dialogue, but there's so little content that the price tag makes it truly hard to recommend.

Elden Ring: How to use Celestial Dew for hostile NPCs

Trek to Yomi preview — Cut down